Creating charts is easy. There’s always going to be one guiding question that influences any chart one may make: What information am I trying to get across? Of course that one question branches off into hundreds of other questions like: what’s the best way to get this information across and what aesthetic choices will best illustrate this information? But at the beginning and the end trying to express information is always the main purpose of any data visualization. If you can’t express the information correctly then you haven’t made data visualization you’ve just made some bad art.

That being said though if information design is considered storytelling then there will always be some element of persuasion or manipulation behind the scenes. It ties into the guiding question of “what information are you trying to get across”, if your information design is explaining to people how much plastic pollution is in the ocean, you’re influencing them on some level to be more aware of their pollution footprint and persuading them to do better. For example look at this graphic from nature.com: 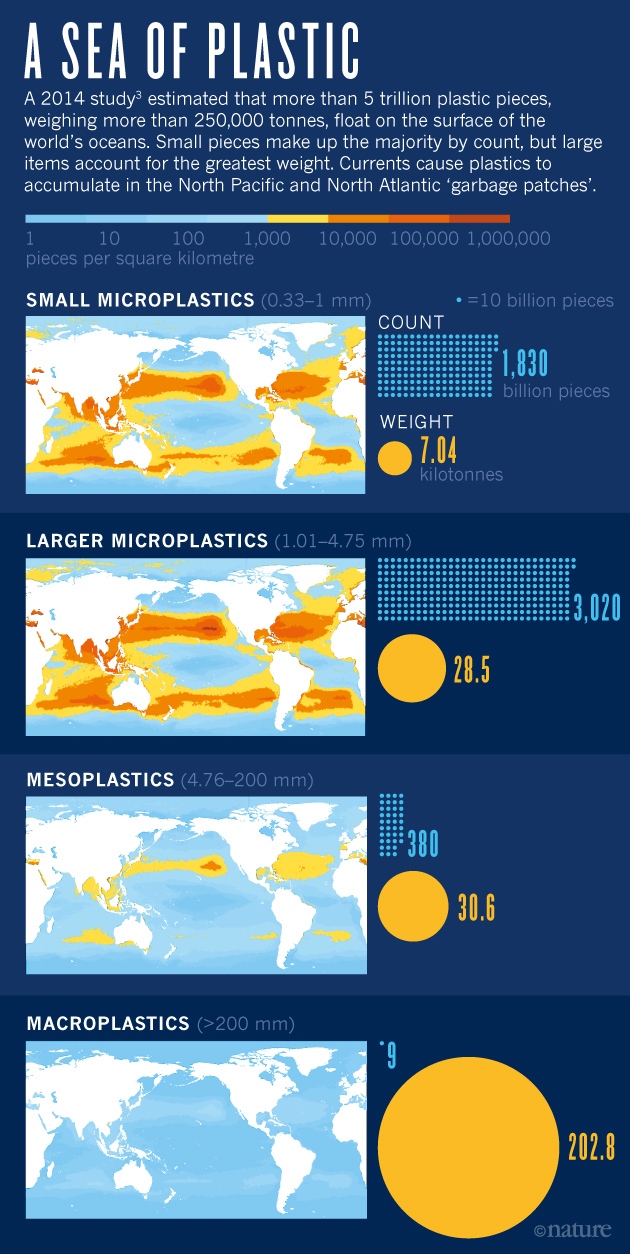 Doesn’t this chart make you want to switch from using plastic straws and kiss a sea turtle? That’s the persuasive nature at work. Scott Berinato in his book Good Charts has a great quote about why this sort of data visualization is so necessary today,

“It’s often not enough to make a chart that’s simply accurate. Managers may need to reveal truths that are dormant in the data to help make a case- to compete for attention, resources, and money.”

I mentioned previously that the guiding question of “what information are you trying to get across” becomes different when persuasion and manipulation enter the equation. With persuasion the question becomes a more pointed, “how can you convince the audience of…”.

Now I know what you’re thinking, “Libby.” “Yes?” “Aren’t persuasion and manipulation kind of the same thing?” Yes again! There’s this confusing gray area that has a lot of different factors, what are you trying to convince the viewer of? How far are you reaching to get your point across? Is it obvious that you’re rearranging factors in your favor? It’s like stealing money out of your mom’s purse, you know you shouldn’t… but really it’s only five dollars you just want a cup of coffee you’re sure she’d give it to you anyway if you just asked… but still. (This actually happened to me last week, I was too much of a goody too shoes to take the five dollars).

I’ll give you an example of manipulative storytelling. Last week I created a chart that displayed the number of unmarried and married gay couples throughout 2005-2017.

As you can see from the data I collected there was a slight drop in the popularity of married couples between 2008 and 2014 before picking back up and overpassing the popularity of unmarried couples in later years. Now, imagine I was somebody that wanted to tell a story that shed gay couples in a negative light. We’ve heard some ignorant people throw around the term “ruining the sanctity of marriage” so I’m going to manipulate the data to support that narrative.

Looks different from the first one, doesn’t it? To start I changed the years to focus only on the ones where the number of same sex couples was low. Next I changed the Y value to start at 100k instead of at zero, with this it tricks the eye into thinking that the number of married gay couples is much lower than it actually is. With those two simple changes I’ve manipulated the narrative into telling a much different story than the original.

Scared? Me too. Data visualization should be all about showing the facts, not manipulating them. So this begs the question, when do we ethically try to persuade and manipulate, how far is too far and what can we do to tell the story we want to tell in the best way possible? I think it’s best to go back once again to the original question, what information are you trying to get across? Think about who your data visualization effects, what effect you want it to have and what kind of message you’re trying to get across. Is it a message of action, awareness or informative? Everybody’s discretion is different but keeping your audience in mind is the best way to make sure you’re not unintentionally manipulating them or persuading them to do something they wouldn’t normally do.

Also it might help to call out other data visualizers you see creating information data that is questionable. Inform other audiences that they may be being manipulated and hold other creators accountable.