Unfortunately for us bad information visuals are incredibly easy to make. Plugging information into Microsoft Excel and having it spit a chart back out at you does not mean Excel just gave you the easiest to read and most visually appealing chart in the entire world. In fact I’m confident in saying that it most definitely did not do that. So where does that leave us when we want to create information visuals? It leaves us as the masters of our own universes, it’s like the age old saying goes, if you want something done right you have to do it yourself.

Great. But how? The first step in creating any kind of visual is to first understand the four different types of information visuals. These types include conceptual-declarative, conceptual-exploratory, data-driven-declarative and data-driven-exploratory. Have I lost you yet? I’ll break it down.

Let’s start with Idea Illustration also known as conceptual-declarative. The types of data shown in these of visuals are a process or a framework of an idea; it’s conceptual so there’s not going to be any actual numbers or figures to work with. These visuals are usually simple and metaphorical and feature a well-known convention. What I mean by convention is something like green is good and red is bad. You can usually find this type of visual being used in a presentation or as a means to teach a subject.

I’ve got a great example of conceptual-declarative data visualization that you’ve probably done once yourself: family trees! Yes, that project you were required to do in fifth grade is actually a (poorly glued together) example of data visualization. If you feel like your colored paper and sparkly family tree isn’t doing the best job representing data viz, I’ve got a better example down below.

Above is a family tree of Jesus printed in the 1611 King James Version of the Bible. This is off topic but I love the little detail of the hands shaking between Mary and Joseph, its just funny to me, like they were having a business deal or something. A family tree simplifies the idea of familial bonds through the conceptual idea of a line. It’s something we can all recognize, the line across is marriage and the line down is children. It’s super effective and why family trees are a great example of Idea Illustration.

The next type of information visuals is Idea Generation, also known as conceptual and exploratory visualizations. This data viz will look more complex and indefinable. It will also still be metaphorical and creative while still using convention. You’ll likely see these information visuals at a work session to brainstorm or to team-build. The goal is to use this information visual for discovery, implication and learning.

I know what you’re thinking, that sounds almost identical to idea illustration and you’re right! The only real difference is that idea illustration has all the facts, think back to the family tree, each member is known and set in stone. Idea generation is used to create, not explain what’s already known. It’s the messy back-of-the-napkin sort of doodling that I absolutely love. 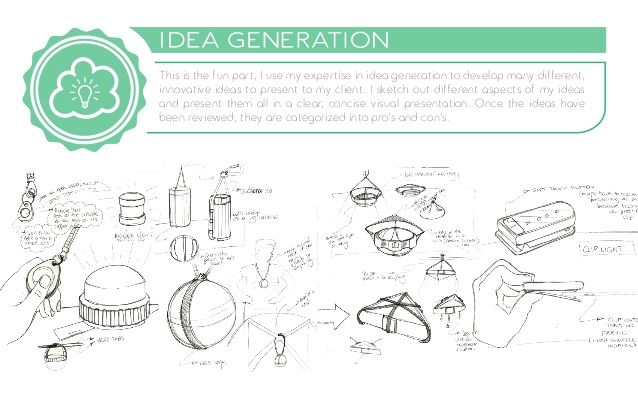 The example above by Heather Jeffery is great. She totally nails the sketchy, perfect by not being perfect method of idea illustration. Also she’s completely right in saying that this is the fun part, there’s no right or wrong here that can hold you back. In fact, one of my favorite professors once said that the only thing holding you back was your own mind. Who cares if you think your idea is weird? All the best ideas are weird!

Next up we’ve got Visual Discovery also known as exploratory visualizations. You would most likely see these in a work session or used as testing or analysis. They’re a favorite for business intelligence, programming, trend spotting and deep analysis. Gone is the sketchy napkin and in its place is big, complex data that is described as “advanced” and “unconventional”.

Visual Discover is a Big Category and covers not only what I listed above but also aims to answer one of two questions:

Feels a bit… existential for data visualization if you ask me. In all honesty these data visualizations are the hardest for me to look at and understand because there’s nothing simple about them. My example for this section comes from McKinsey Digital and attempts to show the changes and trends happening in both the automotive and banking industry. The visual states that mapping mobility start-ups and investments in the evolving automotive ecosystem shows activities across ten clusters. 10 clusters loosely categorized into 4 areas includes >1,000 companies with investments of ~$111 billion, 2010-17.

It’s not actually that difficult to understand and really illustrates Visual Discovery. It shows where trends overlap, has a lot of data all illustrated cleanly and the spaces where lines don’t connect show what’s missing which can be just as important as showing what’s there.

The final type of information visual is the Everyday Dataviz, which is the combination of data-driven and declarative data. This visual is simple, low volume and conventional while stating a clear point and a simple narrative. You can find these visuals in presentations being used to set a context. 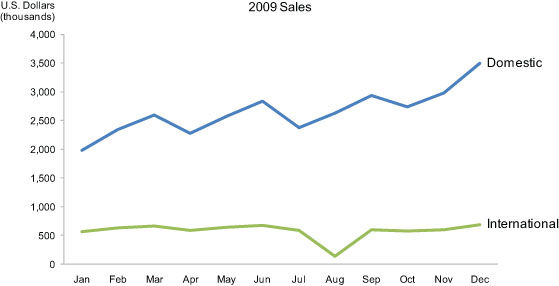 This example from The Interaction Design Foundation is the perfect illustration of Everyday Dataviz. The data is relevant and complete, it’s important to not go too far back and keep data timely. The chart also clearly and simply displays the difference between the domestic and international sales in two distinct lines. This is the kind of data viz I like, no offense Visual Discovery.

So, now that I’ve covered the four types of information visualizations we can all agree that there should never be any more bad information visuals, right? Great! In all seriousness, knowing what you’re trying to express in your visualization and knowing the best way to express it is a surefire way to have a great visual every single time. Learning this information is what’s going to make you stand out in a meeting and get your boss to notice you unlike Jessica who plugged all her information into Excel and hoped for the best. Don’t be a Jessica.