The thing nobody tells you about being creative is that the best ideas will often times feel like you’re pushing the envelope too far or that you’re on the edge of stupidity. Nobody wants to feel dumb, it’s human nature, but breaking past that stigma and embracing the scary and the stupid is really the best thing that can happen to an idea.

Stupid is scary. There’s no denying that but in order to achieve our most creative selves we have to toss that fear aside and ignore the voice in our heads that says “you’re not good enough” and “you’re going to look silly”. Everybody is familiar with judgment, but when you’re doing something creative that judgy voice in your head seems to amply. “How can you think this is okay to show to people? People won’t get this, it’s too weird!”

We’ve all heard the phrase comparison is the killer of creativity and it’s never truer when you’re comparing yourself to other people’s ideas or invisible standards you set for yourself.

Freeing yourself of comparison and frustration can lead you to incredible ideas. In The Creative Spirit, written by Daniel Goleman, Paul Kaufman and Micheal Ray, they state that,

“Although no one enjoys frustration and despair, people who sustain their creativity over the course of a lifetime do come to accept periods of anguish as necessary parts of the whole creative process. Accepting that there is an inevitable “darkness before the dawn” helps in several ways. When the darkness is seen as a necessary prelude to the creative light, one is less likely to ascribe frustration to personal inadequacy or label it “bad.””

Of course you’re going to get art block or writer’s block but once you free yourself of whatever is limiting yourself and learn to get silly, the ideas that come will be better than ever imagined.

I’ll give you a real life example of how getting stupid is the best way to come up with ideas. In a class of mine we had to come up with an app design and it had to be, well, silly. I’ll admit that I struggled at first, I tried to think of popular apps that I knew, Facebook, Twitter, Instagram, I didn’t get very far. I tried to get more creative, instead of thinking of some specific apps, what were the purposes that apps held? I thought again of facebook and twitter, to post things and catch up with friends, I thought also of instagram and tumblr, to look at pictures. Then I thought about dating apps Bumble and Tinder and apps of that nature. I liked the idea of swiping to find something an available person in your nearby area. But how could I make it stupid?

I was inspired at once by a lot of things, the name Tinder, the purpose of the app and my own personal brand of humor, to start. I had the idea of an app called Spark, where you could find ready and willing supplies in your area to start a fire with. Have you ever noticed how much of romance is tied to things that sound like you’re starting a fire? Let sparks fly, it’s getting hot in here, somebody turned up the heat… coincidence? I don’t think so. 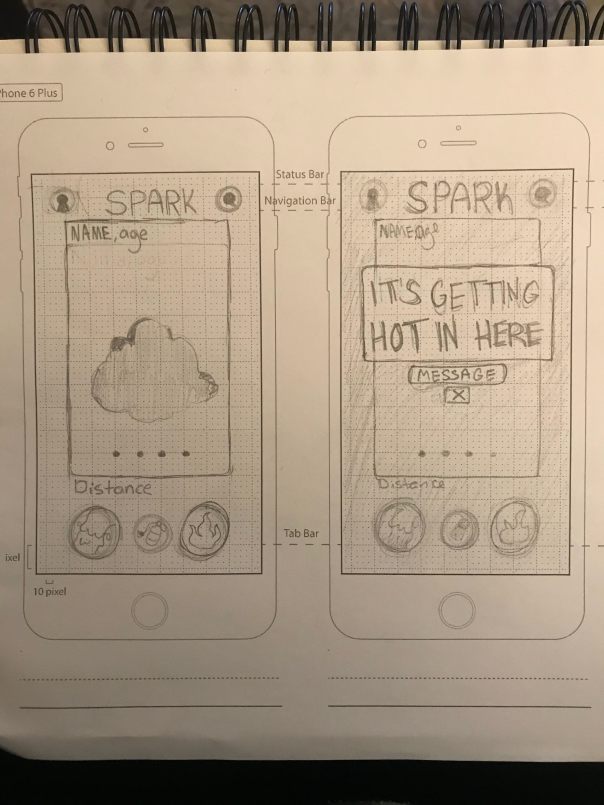 Getting stupid is the best thing you can do, not to mention the most fun. Next time you’re stuck trying to think of a conventional answer and you find yourself blocked try thinking of the stupidest answer to your problem, it might just help.